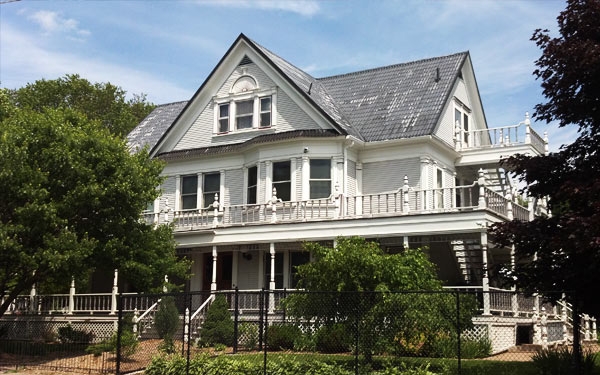 NOT OPEN TO PUBLIC.
Home of one of Ironwoods founding fathers, Solomon S. Curry. In 1887, fire destroyed much of the town of Ironwood. After the fire, Curry purchased land and built this house for his own use. After Curry’s death in 1929, the house was used as a hospital and a nursing home. The balcony on the second floor was enclosed in 1913 and a kitchen was added to the rear in 1952. The house was later turned into a private residence.
The Solomon S. Curry House is a 2-1/2-story vernacular Queen Anne structure, sided with clapboard and shiplap and sitting on a concrete foundation. The first floor has a long, L-shaped open porch; a matching porch on the second story is enclosed with double-hung, six-over-six windows. The roof is cross-gabled with central rectangular attic windows, flanked by two smaller windows, on the gable ends. Several other windows in the house have imported stained glass and Tiffany windows. The interior features 18 rooms, including a ballroom, and ornate woodwork.