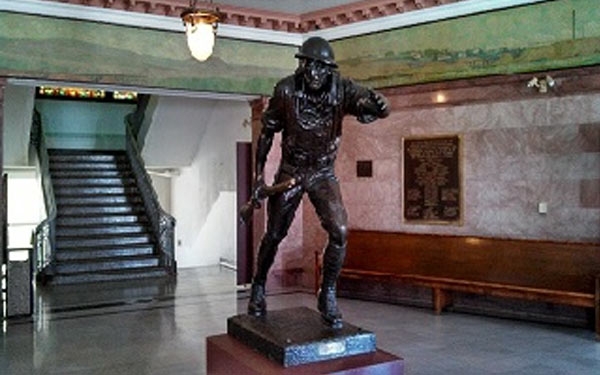 The Memorial Building is a two-story Neoclassical structure built of concrete in a pentagonal shape. The first floor is raised, providing light to the basement level. The two front facades are faced in grey terra cotta and coursed stone, while the remaining elevations are faced with brick. The heavy bronze door entrances are approached with wide granite steps and are flanked by Ionic columns. Above each entrance, clocks are inset into the terra cotta. A balustrade runs around the roof edge. Multipaned windows separated by pilasters and topped with arches run around the first floor, and rectangular windows with architrave trim are used on the second.
Inside the building are municipal offices (including a court room and council chambers), community facilities, a 1,500-seat auditorium, a pool and gymnasium. The building houses 47 stained glass windows (including a number depicting the Battle of Argonne), a statue of World War I doughboy, and bronze tablets listing area men who served during the Civil War, Spanish-American War, and World War I. A mural by artist Carl Frezell depicting local iron mines was funded by the Works Progress Administration. The Ironwood Women’s Club has a private clubroom in the building.